The Clarion Programming Language – a History of the Clarion Language

Clarion 1.0, a DOS programme, was launched in April 1986 as the first version of the Clarion language. Bruce Barrington, one of the founders of the healthcare firm “HBO & Company” (later bought by McKesson Corporation), and a small team of developers produced Clarion. Barrington’s goal was to build a language that was both short and expressive, as well as a screen designer that would maximise the use of the IBM PC’s memory-mapped screen. Version 1 generated pseudocode and contained a screen designer, interpreter, editor, and debugger in its initial release. It supported databases made up of DAT files, which were Clarion’s proprietary ISAM file format at the time. Barrington Systems was founded by Bruce Barrington, who published version 1.0.

Clarion 1.0 needed the usage of a dongle, which was frowned upon by the industry at the time. The opportunity to produce royalty-free applications compensated for this. With release 1.1, the dongle was removed.

An even more rudimentary version was available at the time. Personal Developer had strong limitations on what a user could accomplish, yet it was sufficient for extremely simple database applications. It was significantly less expensive than Professional Developer 1.x.

Clarion Professional Developer (CPD) 2.0 was published in May 1988, and it included a component called Designer, which had a data dictionary. Clarion code was created by CPD using the contents of the dictionary and a template known as a “model file.” The model file could be updated (in restricted ways) to produce custom code because it was a text file. The model file was created using the “browse and form” paradigm, in which data is first displayed to the user in a list box, and then updated using a form triggered by the list’s buttons. Developers could enhance functions by inserting code at specific locations in the generated code or by hand-coding additional procedures, and designers could write all of the fundamental CRUD (create, read, update, delete) code. Language Extension Modules (LEMs) were also introduced by Clarion Professional Developer, which allowed the language to be extended by using modules produced in other languages and constructed to the LEM standard. LEMs were designed for a variety of uses by Clarion Software and numerous third-party tool developers, including an extension for connecting to other databases like dBase, Clipper, and Paradox.

CPD 2.x was a database system that included all of the displays, reports, databases, and support files that were needed. Clarion Personal Developer, a version of Clarion 2.x for end-users, was also launched to allow business users to construct personal applications. Clarion Report Writer was published about the same time. This was designed as a standalone product for Clarion Personal Developer users and users of applications made by CPD developers, as well as a built-in programme included with Clarion Professional Developer version 2.1, which was launched in 1989.

Barrington purchased compiler technology from Jensen & Partners International in 1991. (JPI).
Niels Jensen, who had previously been one of the founders of Borland (1979 or 1981), formed JPI in 1987. Philippe Kahn was the man in charge of promoting Borland’s $49 Turbo Pascal compiler. When Kahn decided to buy Wizard C and rename it Turbo C, Niels and his colleagues were working on a new compiler technology at Borland. Niels and a group of other developers left Borland to found JPI, where they continued to develop their compiler technology, TopSpeed, which they purchased for $1.7 million from Borland.

CDD 3.0 (Clarion Database Developer) was launched in 1993. It was a game-changing product, with numerous features and technology that allowed programmers to construct programmes with a “Windows-like” Common User Access (CUA) user interface. Many of the CDD enhancements were well-suited to the Windows programming paradigm, laying the framework for Clarion for Windows in the future.

The CDD IDE was a completely new development environment based on the JPI IDE. It came with a number of high-quality programming tools, including an editor, a project system, a compiler, a linker, and a visual debugger. CPD’s p-code was vanished. The Clarion language’s JPI compiler generated actual machine code. exes, LIBs, and dynamic-link libraries are all examples of executables (DLLs). Protected mode binaries may be generated, allowing DOS programmes to utilise more memory than the 640 KB limit.

New data types (CSTRING, PSTRING, DATE, TIME, USHORT, ULONG), file driver system (e.g. Btrieve, Clarion, Dbase, FoxPro, Paradox), queues (tables), and screen processing for CUA were all added to the Clarion 3.0 language. Models were phased out in favour of templates, which were more feature-rich and adaptable. This allowed for considerably more robust and complicated code to be generated.
With all of this additional power comes a new level of intricacy. The shift to CDD was problematic for many existing users. CPD was simple and straightforward to use, which drew in a large number of nonprogrammers who could create programmes by answering questions. Professional programmers were better suited to CDD. Programs could still be written with ease, but the IDE’s size and functionality made it appear complicated.

CDD’s first five patch releases were so buggy that they were practically unusable, causing so many consumers to forsake the programme that it was a near-disaster for the company. Clarion kept working on CDD until it was usable in version 3.007.

Clarion for DOS (CFD) version 3.1 was released in 1995. This was far more stable, although there was little interest in DOS programming tools at the time. The TopSpeed file driver, an ISAM file format that allows all indexes and numerous data files to be included in one single file, was a key feature.
Clarion Software and JPI’s connection became stronger during this time, and on April 30, 1992, Clarion and JPI combined to establish TopSpeed Corporation. Employees at the London-based TopSpeed Development Centre got to work on CDD and fixed a lot of the flaws.

Clarion for Windows version 1.0 (a.k.a. CW 1.0) was released by TopSpeed in January 1995. The final version of 1.003 was released in June 1995. The IDE was developed entirely in Windows and could generate Win16 EXE and DLL binaries for Windows 3.x. Many changes were included in the language to enable the event-driven Windows user interface. A multithreaded MDI application could be readily created by a Clarion developer. CW 1.0 built on the database flexibility introduced in CDD by providing an ODBC driver that allows users to connect to SQL databases or any other source that supports ODBC.

In CW 1.0, the DOS monolithic template concept was considerably improved, and a model that allowed a window to use several templates was replaced (Extension, Control or Procedure templates). A screen procedure in DOS, for example, may support viewing one data table. A Window could employ many Browse Control Templates in CW 1.0, each of which displayed a distinct table. Clarion code generation improved dramatically as a result of this architectural modification.

Version 1.5 (a.k.a. CW 1.5) of Clarion for Windows was released in September 1995, with version 1.502 following in January 1996. The ability to create native Win32 binaries for Windows 95 and Windows NT 4 was included in this version. The same source code might be used for Windows 16 or Windows 32. Although the IDE remained 16-bit, 32-bit compilers, linkers, and debugger were added.

Clarion 4 (also known as C4) was released in December 1997, with version 4.002 following in May 1998. TopSpeed chose to bypass version three (the official explanation was that CW 1.5 “should have been CW 2.0,” thus CW 2.0 “should have been CW 3.0,” so let’s just name the next one version 4) and instead focus on version four. The “for Windows” title was eliminated due to the demise of DOS development.

Application Builder Classes is a new template set and class library that arrived with C4 (ABC). The initial template set produced procedural code that was becoming progressively complicated. The ABC template set used the class library, which held the majority of the functionality for windows, browses, forms, and so on. Constructors and destructors were added to C4 to improve OOP (without parameters).

Clarion 7 was launched on April 13, 2009 by SoftVelocity (a.k.a. C7). SharpDevelop users will recognise the new IDE because SoftVelocity purchased a commercial licence for the SharpDevelop code and integrated Clarion’s code generation and application generation technology, as well as fixing and expanding the fundamental functions. A build system based on MSBuild and backward compatibility with all Clarion releases back to Clarion for Windows 1.5 are two major new features (other than the normal current IDE features lacking in C6).

Clarion#, a beta.NET Framework version of the language, is available. Clarion is still a Win32 development environment. Although Clarion# and C7 share the same IDE, they are now sold as independent products. Clarion# does not yet feature a dictionary editor or an application generator, unlike Clarion 7 and later releases. Both Win32 and.NET development were anticipated to be supported by a single Clarion7+/Clarion.Net IDE. Clarion.future Net’s is uncertain, given that it has been at least 14 years since it was announced without a gold release. 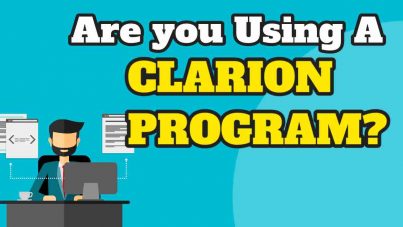 Are you Using A CLARION Program?